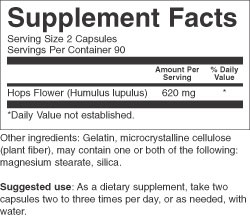 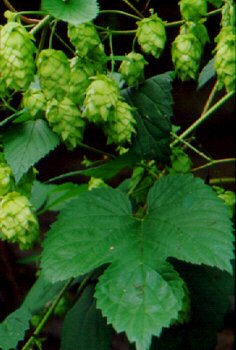 Habitat: Hops is indigenous to much of the Northern Hemisphere, being traditionally found in Northern Europe, North America, and West Central Asia. The first documented instance of hop cultivation was in the year 736 in central Europe and in the following few centuries hops became widely cultivated in Bavaria, Bohemia and Slovenia, later spreading to Britain. In 1629 hops cultivation began in North America and in the 1860s it began in China, Korea and Japan. Production today is widespread, but almost 75% of the world's hops comes from 3 countries: Germany, the USA and China.

Characteristics and properties: The most well known use of hops is as a flavouring in beer and it's for this reason that hops is one of the world's most commercially important crops. Although in terms of weight hops is a relatively minor ingredient in beer, it's a very important ingredient because it gives beer it's distinctive bitterness, a characteristic of hops which no other plant is able to provide. Hops first became widely used as an ingredient in beer because in addition to adding flavour, it is also a natural preservative and was found to be very effective at preventing beer from souring and so greatly extended its keeping power. This enabled beer to be transported significant distances, rather than needing to be consumed close to where it was brewed, and brewers could therefore operate on a much larger scale.

The first known use of hops for therapeutic purposes was in the ancient world, in Egypt and Babylonia, where it was believed to help protect against leprosy and the plague. In Europe the therapeutic use of hops dates back to at least the ninth century, when it was used as a remedy for "melancholy" and became known as a vermifuge, a 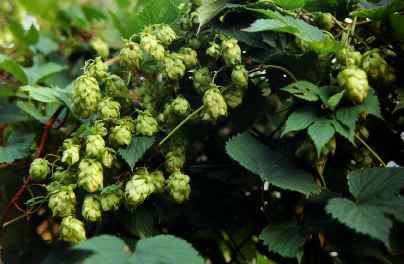 substance which is known to expel parasitic worms. By the twelth century hops was also regarded as an aperitive, a depurative and a laxative, and was highly regarded for its sedative and relaxing properties. Later it was used to treat liver disease and general digestive complaints. In North America hops was much used in native medicines, particularly by the Cherokee who used it as a anti-rheumatic, anti-inflammatory, analgesic, sedative, gynecological aid for breast and womb problems, and kidney and urinary aid for "gravel" and inflamed kidneys. In traditional Chinese medicine, hops is used to treat insomnia, restlessness, dyspepsia, intestinal cramps, and lack of appetite. Clinical studies in China have reported good outcomes for the use of hops preparations in the treatment of tuberculosis, leprosy, acute bacillary dysentery, silicosis, and asbestosis. In India, the Ayurvedic Pharmacopoeia recommends hops for restlessness associated with nervous tension, headache and indigestion, and reports its main actions as sedative, hypnotic, and anti-bacterial.

Today hops is most commonly used for its calming effect on the nervous system, being prescribed for nervous tension, anxiety, irritability and spasms, and for its excellent and potent sedative effects which are used to induce better sleeping patterns, hops extract being used as an ingredient in many sedative medicines, and also as an ingredient in cough syrups. Hops has also become notable, particularly in Europe, for having beneficial effects on the female 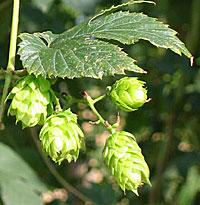 endocrine system. This is due to it having a high content of flavonoids, a form of phtytoestrogens, and has led to it becoming a common ingredient in natural breast enhancement formulations. It has even been claimed that taking hops alone encourage breast development and even that drinking lots of beers which are high in hops will help to make breasts grow. Other modern uses of hops are for irritable bowel syndrome and premature ejaculation, and as it has diuretic properties it is taken for various problems with water retention and excess uric acid. Hops tea is said to be excellent for cases of delirium tremens and hops with honey is said to be highly soothing in cases of bronchitis.

Hops also has external uses and has long been applied as a poultice to alleviate the pain and inflammation of abscesses, boils, swellings, and neuralgic and rheumatic complaints, as well as to allay skin infections, eczema, herpes and ulcers. Dried hops is traditionally sewn into pillows to help with cases of restlessness and insomnia and as a nightmare preventative. Shampoos for greasy hair and dandruff make use of hops for its antiseptic and seborrhoeic properties, and in recent times hops has come to be regarded as useful for hair growth as well as hair condition due to its beneficial action on the scalp, and as a result is now included in many hair growth products. In fact hops has a good effect on the skin generally, being a stimulant of the cutaneous metabolism, and is therefore often used in skin products and bath gels.

Culinary uses: Hops is a traditional food in many countries, the young shoots being eaten raw or cooked like asparagus. The ancient Romans 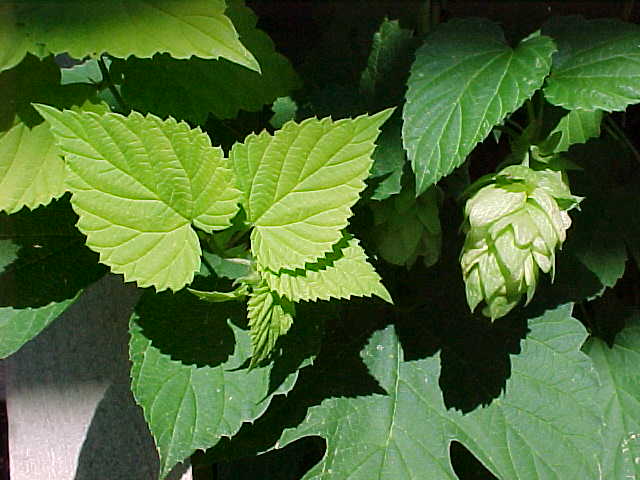 in particular regarded them as a great delicacy. Hops has also long been used for making breads and this was common throughout Europe for many centuries. Today the most renowned hops bread is baked in Trinidad and is a great speciality of the Caribbean island's traditional cuisine. The first written account of the use of hops in a drink is from Jewish writings during the captivity of the Jews in Babylon, where they refer to a strong drink made from hops. In Europe the first mention of hops being used in drink was in 1079, when hops was referred to as an ingredient in brewing beer, and over the following centuries the use of hops in beer spread across the continent. In 1400 Dutch beer made with hops reached England and in 1428 England had hops of its own planted for the first time. Today almost all commercially brewed beer uses hops and all have the distinctive hops taste, but the degree of bitterness varies greatly from one brew to another depending on the amount of hops used in the beer and also the variety of the hops, with particular hops varieties becoming associated with particular styles of beer. There is even an international scale now to measure the bitterness of different beers, called the International Bitterness Units (IBU) scale.