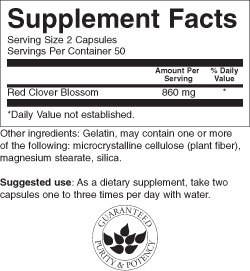 Contraindications: red clover is not recommended for use during pregnancy or breastfeeding.

Habitat: Red clover originated in Britain, but is now naturalised and well known in many countries. In Europe, Central and Northern Asia it is abundant from the Mediterranean to the Arctic Circle and not just on good ground but high up into the mountains. It's distinctive purple blossoms commonly dot fields across North America. This perennial herb grows best in sandy meadow lands, especially where soils are rich in calcium, phosphorus and potassium.

Characteristics and properties: Red clover is rich in isoflavones, which are a group of phytoestrogens, including genistein, daidzein, formononetin and biochanin-A, compounds which are recognized as supporting hormone levels without having any negative side effects. Controlled clinical trials have shown that these compounds help to maintain proper bone density in menopausal women and have the added benefit of relieving the nuisance of hot flushes and night sweats. Recent research also indicates that the isoflavones found in red clover have a protective effect on cardiovascular health through the menopause. One study found that menopausal women taking red clover experienced a significant improvement in arterial compliance, the

strength and resilience of arterial walls. Arterial compliance diminishes during menopause and may increase a woman's risk for heart disease.

Although a great deal of red clover's reputation as a therapeutic herb rests on it's ability to help women during the menopause, research is continually showing that the isoflavoves it contains have much wider benefits than this and can be instrumental in preventing and treating many of the major degenerative diseases plaguing our society today.  Isoflavones support good health in very many ways, such as: 1) they bind at estrogen receptors and prevent the body from over-producing estradiol; 2) they dilute xenoestrogen-type toxins by binding at receptor sites and function as anti-estrogens; 3) they boost progesterone expression and help to normalize the body's important estrogen to progesterone ratio; 4) they reduce cholesterol and support the liver in its critical role of detoxifying the blood and converting excess estradiol into the more benign form of estriol; 6) they are powerful antioxidants; 7) they prevent the formation of new blood vessels that feed abnormal cells; and 8) they boost several beneficial

enzymes within the body that prevent DNA adducts and reduce cellular damage and aging.

The isoflavones in red clover are inevitably making the herb increasingly renowned for its health giving properties, but in recent times they have also made red clover well known as one of the most significant sources of phytoestrogens and consequently one of the most frequently chosen herbs for natural breast enhancement. Its popularity in this respect continues to grow. Red clover is also a source of many other valuable nutrients including calcium, chromium, magnesium, niacin, phosphorus, potassium, copper, iron, thiamine, and vitamin C.

Red clover is traditionally recognized as a detoxification herb or "blood cleanser". The tea, like that of licorice root, is also said to be effective for treating gastrointestinal problems and can be used externally as a hydrocortisone cream replacement for alleviating skin inflammations, eczema and psoriasis. Historically, the blossom tea was also used as an antispasmodic and mild sedative. Red clover also has alterative,

antiscrofulous, aperient, detergent, diuretic, lymphatic, expectorant and tonic properties and is helpful with whooping cough and bronchial coughs. Fomentations and poultices of the herb have been used as local applications to cancerous growths, swellings and inflammations.

Culinary uses: The young leaves and new flowers are harvested and are used in salads, soups, and as a pot herb. The sprouted seeds are edible in salads and have a crisp texture and robust flavour. A delicate sweet and medicinal tea is made from the fresh or dried flowers, by adding 1 to 2 tablespoons of the flowers to 8 oz of boiling water and steeping for 10 to 30 minutes.

History and curiosities: Red clover has been valued since ancient times as grazing food for cattle and other livestock, and today it still serves as common fodder for domestic animals. In the middle ages the clover came to be considered a lucky charm and was commonly worn to ward off evil spirits and witches. The four leaf clover was the usual choice and was regarded as having particular power against evil. A two leaf clover was believed to give a maiden the power to see her future suitor.